A film made by group of young people in King’s Lynn to celebrate the history of Chapel Street, as part of the King’s Lynn Heritage Action Zone, received its ‘world premiere’ on Thursday.

The film was shown to an invited audience at the Corn Exchange, when the young people also received certificates recognising their achievements.

“Our task was to commission a film for Historic England as part of the Heritage Action Zone project, talking about the history of Chapel Street.

“Learning more about the history of Chapel Street was really interesting and talking to museum curators.

“We started in November, interviewing people who used to live in Chapel Street. There was a lot of work doing the research and fact-checking, and turning all that into a script.

“We directed it, filmed and edited it, and that was really good: we had to pitch to the graphic design team about what we wanted, it was really interesting talking with industry professionals.”

Rachael Williams, Learning and Engagement Officer for Stories of Lynn, supported the group through the process of making the film. She said:

“The young people who were commissioned to make this film have been amazing and they have proved they can deliver by producing this film on time and on budget.

“They have made this film themselves. They researched, filmed, edited and subtitled it, and did all the commissioning for any professional help needed: acting, musical composition and graphics.

“This project has also given them a deeper appreciation for King’s Lynn and the value of its history.

“I am so proud of what they have achieved and look forward to seeing how they continue to use the skills they have learned.”

The young filmmakers are all members of Kick the Dust, a scheme which gives young people the chance to engage with local heritage and culture, and to develop their skills and confidence.

Kick the Dust was commissioned to make the film as part of the town’s Heritage Action Zone (HAZ), a five-year programme delivered by Historic England and the Borough Council of King’s Lynn and West Norfolk (BCKLWN).

The HAZ has focused on researching the heritage of the town and engaging with the local community to understand the importance of this historic trading port. The findings will inform future development in the town.

The history of Chapel Street was one of the areas investigated and, as part of this work, Historic England commissioned BCKLWN to find a community group to make a film about its history, which in turn led to the commissioning of Kick the Dust. 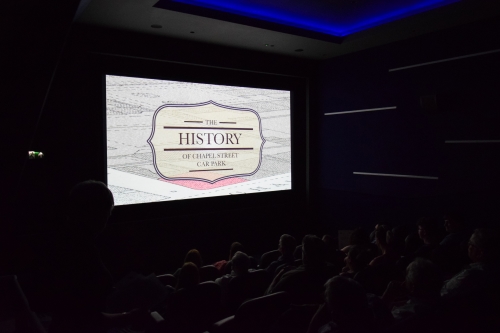 Cllr Richard Blunt, chair of the HAZ project board, said:

“King’s Lynn is a town with a wonderful history. The Heritage Action Zone has helped us to learn more about this history and how the power of the historic environment can be used to help us safeguard its future.

“Kick the Dust’s film is a fantastic project because it has helped this group of young people to learn more about the history of the town while at the same time giving them skills they can use when they go into employment.”

“This fantastic film captures the personal stories behind the historic buildings of King’s Lynn.  It’s been wonderful to have young people working on this film as part of Kick the Dust, using their creative talents to bring the past to life in such a vivid way. Hopefully this experience will help in their future careers.”