Public service of commemoration to mark anniversary of Falklands conflict

On Saturday 2 April King’s Lynn hosted a service of commemoration to mark 40 years since the start of the Falklands conflict.

The service was held in Tower Gardens exactly 40 years since the start of the conflict. Mayor’s Chaplain and Parish Priest of All Saints Church, Rev Canon Father Adrian Ling, lead the service of commemoration, followed by the laying of wreaths by the mayor and Royal British Legion.

Mayor of King’s Lynn & West Norfolk, Cllr Harry Humphrey, said: “Argentina invaded the Falkland Islands on April 2, 1982, sparking three months of fighting, which cost the lives of hundreds of British and Argentinian servicemen. The Royal Navy, Royal Air Force, Royal Marines, Parachute Regiment and the Special Boat Service played a key role in recapturing the South Atlantic islands – 7,000 miles south of the UK, with the war coming to an end on June 14, 1982. 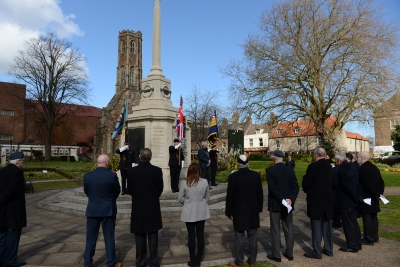