The University Centre at the College of West Anglia hosted Year 11 students from seven secondary schools in the area to participate in a series of challenges.

The aim of the conference was to give the students an opportunity to push each other beyond their limits in their core subjects, helping to build confidence and inspire them to achieve even better results in their GCSEs this summer.

Inspirational speakers talked to students about their lives, how they became successful and future plans. One of the speakers was Tim Edwards, assistant chief fire officer at Norfolk Fire and Rescue Service.

This unique event is the only one in the area where students don't work in their school groups. They are put into mixed teams of six named after UK universities.

Cllr Geoff Hipperson, the Mayor of King's Lynn & West Norfolk presented the winning teams with gold, silver and bronze medals. All students attending received a certificate of attendance and a goody bag of pens, pencils, notepaper and water - everything to get them through the day.

Cllr Hipperson said: "It’s been interesting to see how the students cooperate and communicate with each other. I hope that the day will inspire many of the year 11s to succeed in the future.”

The event was originally created by John Hirst on behalf of the West Norfolk Partnership and now continues as part of the learning partnership to increase achievement in the borough's schools. The event is designed to stretch pupils in the top 10% of their school and to give them a taste of higher education in a university setting. 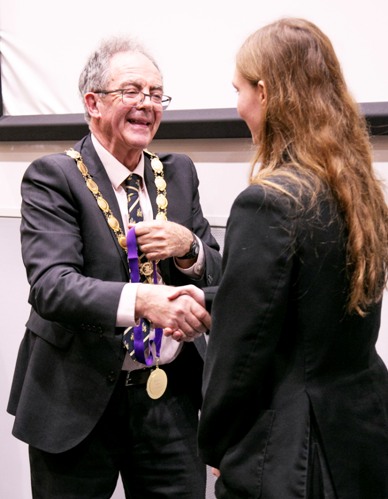