The Tuesday Market Place had over 200 classic cars on display on Sunday 15 September as part of Heritage Open Day.

The Borough Council of King's Lynn & West Norfolk’s popular event was the most successful ever, with all spaces booked out over two months ago.

A wide variety of vehicles were on show, dating from a 1904 Oldsmobile Curve Dash to a 2019 I Pace.

Cllr Graham Middleton, Cabinet Member for business development for the Borough Council of King’s Lynn & West Norfolk, said: “The magnificent Tuesday Market Place was full of classic cars, from a Ford Anglia to an E-type Jaguar, American pick-ups to a Daimler and a classic Mini. People filled the square looking at the cars and enjoying the live music provided by Carnaby Sounds and the Summertime Kings.

“This is the last event of our summer programme in King’s Lynn. The weather has been perfect and it has once again proved to be one of our most popular events. It complements the Heritage Open Day which is organised by the Civic Society and this year celebrates its 25th anniversary. Together they really show off our town at its best.”

The car judged as best in show was a Rover P5B. Owner, Mr Wallett, received the Les Daubney Memorial Trophy which is personally sponsored by former mayor and councillor Nick Daubney in memory of his late father.

Heritage Open Day, organised by King’s Lynn Civic Society, celebrated local history and architecture and gave people the chance to explore a range of fascinating buildings and gardens, not usually open to the public. 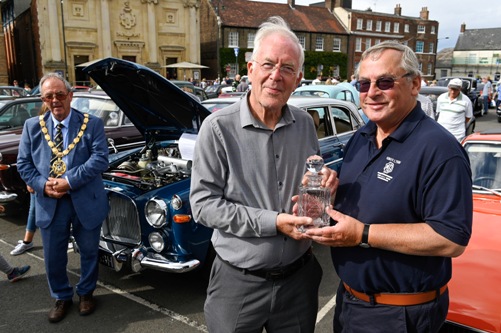