Over the borough new plants are appearing as the street scenes teams design and bed-in this season’s flower displays. 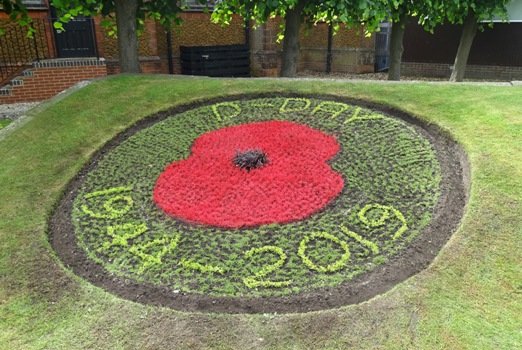 Paul and the Central team who look after the rest of King’s Lynn, amongst others, are proud with the D Day Display they have just created in Tower Gardens. They used cotton lavender, sedum gold mound, black grass and arenaria balearica to create a poppy design with letters around it.

Paul said: “We’ll pop back every 10 days to clip the lettering to keep it clear. I’m really looking forward to seeing it, once it’s grown a bit, over the next couple of weeks”.

All hanging baskets are being refreshed, alongside planters, tubs and troughs, with summer bedding that has been grown at the council nursery.

Each year, over 70,000 plants are grown and looked after by two council employees, Andy and Darren. Between them they have 24 years’ experience growing everything for the borough.

No chemicals are used on these plants at the nursery and there is a water harvesting tank that collects rainwater to keep them watered.

The nursery also has a bird scaring device to deter seagulls from breaking in and trying to attack the flowers.

It took only four days for Sponge and his team to plant all the beds in The Walks, King’s Lynn. Quite a feat given the number of plants and beds in the 17 hectare site.

Mick and his northern team have taken just two weeks to bed-in around 14 thousand plants between Dersingham and Burnham Overy Staithe ahead of the busy holiday season.

Throughout the summer months the public can enjoy the efforts of the street scenes team and in the autumn a whole new batch of plants will be bedded in.